Yay! Part Six of Easy Street is finished and in the tub with the rest of it's friends.

The good part:
Easy Street has been such a good way to whittle down stash fabrics.

The bad part:
I keep finding more of this:

Looks like I will be spending the first few days of the year doing this:

Well, it took a lot of perseverance, but I am finally caught up on the Easy Street Mystery quilt. Okay, it's Thursday, and the sixth part will be posted tomorrow, but for today I am Caught UP! I can hardly wait to see how the parts will all go together.


I sewed my Grandmother's Choice block right away when it was posted last Sunday. This was one of the easier blocks thanks to Barbara's description on how to construct the block. I don't want to get behind on these again.


Unless something comes up, I'll be working on Part 6 tomorrow!
Posted by Karen in Breezy Point at 6:24 PM 4 comments:

We didn't put up our large tree this year. Actually, we haven't put it up for several years. We have a pre-lit tree that was a gift from one of our sons and it is beautiful, but lots of work to decorate (because I have way too many ornaments).

We are kind of over the fresh trees after several disasters involving our pet cats. And trying to suck the needles out of the cracks between the floor boards. Things like that.

That doesn't mean we have a tree-less holiday though. These are some of the trees that are up around the house this year.


I hope you have a Wonderful Holiday--tacky or not!!!

I had a bad reaction to the flu shot I had on Wednesday and spent all day yesterday in bed. It's a good thing I was still feeling pretty good on Thursday and managed to finish up my gift shopping. I still have a bit of grocery shopping to do, but not too much.

After fourteen hours of sleep, I'm in a fog. Of course, I have a million things to get done before Christmas Eve, and feel no ambition whatsoever to start on any of them. So here I am, sitting at the computer, sipping tea and talking to all of you. I feel better already!

I realized I still had a ton of photos from the retreat in October that I haven't shared yet. I think I forgot to reset my flash, so the photos don't show the quilts in their best light or were too blurred to use. Believe me, they were all beautiful! Too bad my memory is so bad and I can't tell you too much about these

Last year I was kicking myself for not jumping on Bonnie Hunter's mystery quilt right away. By the time I had made up my mind that I wanted to quilt along, it felt too overwhelming to start. I should have printed out the instructions, but by the time I decided to do that, Bonnie had removed the instructions from her site in anticipation of including the pattern in her latest book.

When she announced her new mystery, Easy Street in November, I told myself that I would sew along and NOT get behind. It didn't exactly work out that way, but after this weekend, I am only one step behind. The mystery began on November 23rd and each step is posted on Friday. There will be 6-8 steps in total. Bonnie cuts her pieces from strips and uses an Easy Angle ruler to cut triangles. There are lots of helpful posts out in the cyber world that demonstrate ways of making some of units using other techniques. For instance, Bonnie has put up a PDF of the no waste method for constructing the flying geese if you aren't cutting from strips. Katie's Quilting and Sewing has a great tutorial on marking and sewing the Shaded Four Patches for Step Three of Easy Street.
The fourth step is up (more flying geese) and I am hoping to get my fabrics cut tonight and start sewing them together later this week, hopefully before Step Five is posted on Friday. Tomorrow will be a no-sew day since it's time for my annual check-up and then shopping for all the last minute Christmas shopping I have been procrastinating in completing. Bleah!

So far, I'v also managed to  keep up with my Grandmother's Choice blocks and love reading about this aspect of our history--such inspiring stories! 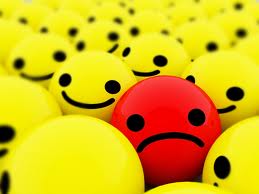 I'm a bit sad that my Courting Quilt didn't win one of the big prizes in the Morton Masterpiece contest.

The good news is that I will have my quilt back with me soon and I will be getting some nice consolation prizes. It was a thrill to be included with so many awesome quilts.
Thanks everyone that voted for my quilt!
Posted by Karen in Breezy Point at 7:20 PM 7 comments:

I don't plan to do much baking this year for the holidays. The problem is that what I bake, I eat.

Like everyone else, I have recipes that I usually make this time of the year like Spritz butter cookies, Russian tea cakes and peanut brittle. Thankfully for me, I haven't felt the urge to make any of these.

I had a bag of cranberries in the fridge that needed to be used for something soon. I thought about relish, but my Mom makes a yummy cranberry orange relish and she plans to make it again before Christmas. She puts it in small jars and hands it out on Christmas Eve. I was daydreaming about that little jar relish that I will get in ten days, and it reminded me of the Cranberry Orange bread I used to make every year.  I'm pretty sure I haven't made it for at least ten years, which is too bad, because it's delicious!


I made a double recipe so that I could use up the whole bag of cranberries. It ended up being a generous amount of cranberries, but that's okay--more anti-oxidants! And look--only two tablespoons of oil (I use canola)! And only one egg! It's like health food (if you don't notice all the sugar)! I don't think I would cut back on the sugar because of the tartness of the cranberries. The bread is super moist--I'm not sure if it's from the orange juice or the cranberries, but it's also very tender. I would only use fresh orange juice and zest. One year I used the dried orange peel sold in the spice and seasoning aisle. It was convenient, but it made the bread very dry, so maybe some of the moisture comes from the oils in the orange zest? I used 3 big oranges and had plenty zest, but I was a little short of juice for a double recipe. I was out of oranges but luckily I happened to have a bag of clementines, so I squeezed a couple of those to get the juice I needed. If you make one loaf, three oranges should give you more than enough juice.

Sometimes projects end up in the UFO (unfinished object ) bin just because I lose interest in them. I get excited to start a new project or maybe I just get bored. Or, sometimes it's because I just get fed up. Okay, this is going to be a bit of a rant! Sometimes patterns are just badly written and cause so much frustration that the whole project gets thrown aside in disgust. That is what almost happened to this quilt.


The story of: The Fallout Shelter Quilt

I very rarely buy kits. I like to choose my own fabrics, especially from my stash, if possible. I found this kit on sale at a quilt show. I wasn't crazy about the pattern (there was something about it that bothered me and I couldn't pinpoint what it was), but it was a package of reproduction fabrics at a forty percent discount. How could I pass that up? I knew I could use them in a scrappy quilt. Then the pattern started to grow on me and I decided to make up the kit just the way it was meant to be.

The blocks were fun to make and went together quickly by cutting sixty degree triangles from strip sets. Still, there was something nagging at me about those blocks! I worked on them at a retreat and that's when my friend Sandi pointed out that they looked like warning signals. Yep, that's what it was that had been bothering me!

But now my quilt had a name: The Fallout Shelter Quilt!

The blocks sat for a while until I finally put them up on the design wall to figure out my setting. They were easy to put together in rows. Next step: the dreaded set-in side triangles. I did put those off for a while but when I finally made myself sew them in, it was pretty easy.
Next step: the sixty degree triangle border. The pattern said to cut "lots" of them. Really? Could we be more specific? I counted the triangles in the picture on the cover of the pattern to determine how many I would need. They were to be cut  from (3) 3.25" strips each of the light and dark fabrics according to pattern. Wrong!! There was no way could I get enough triangles from 3 strips! I ended up having to cut seven strips from each fabric in order to have enough  triangles to go around the quilt. Luckily I had enough yardage in the kit to do that, but now I didn't have any binding fabric.


Now the pattern goes backwards. Before the triangle border goes on, a little spacer border goes on  so the  blocks float and  also to get the quilt to the correct size so the triangles fit. To determine the width  of the little floater border, you simply follow these instructions: After my eyes uncrossed, I realized I only had the barest amount of the black print left, so I just cut what I could, piecing together scraps from the previous steps. I didn't even try to figure out the crazy formula given in the pattern--I just kept my fingers crossed and hoped for the best.
The kit had a Jo Morton red and black print for the last outer border. It wasn't working for me somehow. Instead, I chose a blue/gray from my stash and I'm pretty happy with it. I will bind it with a solid black, also from my stash. 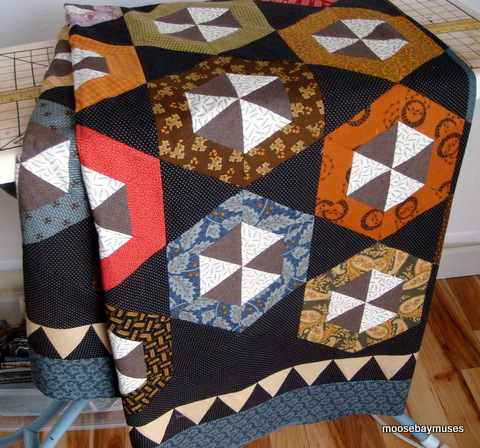 Now it goes into the "To Be Quilted" bin. At least it was saved from the bottomless UFO bin!