End of an Almost Era?

It's been almost ten years since I did my first blog post (August 9 2012). I am told that if you subscribe to Moosebay Muses by email, the Feedburner platform is going away and you won't receive the latest post in your mailbox after June. I've made the difficult decision to stop blogging and not make the move to a new platform. I want to thank everyone that has followed the blog--I thank you from the very bottom of my heart! It has been wonderful meeting and conversing with other quilting enthusiasts and making new friends. I am still posting (occasionally!) on Instagram and hope you will look me up there--I am breezypointquilter.

These are the last of the photos on my camera--I haven't completed anything in the  months since my previous post way back in January, but have started several--lol! 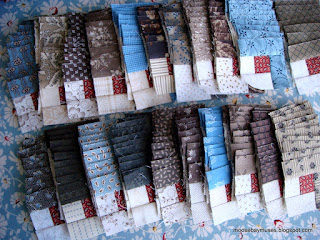 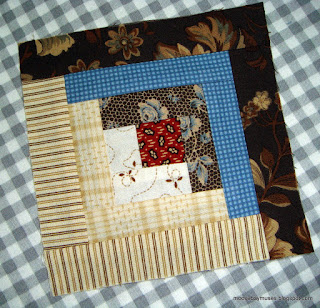 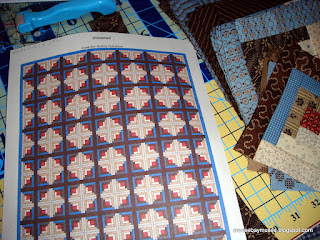 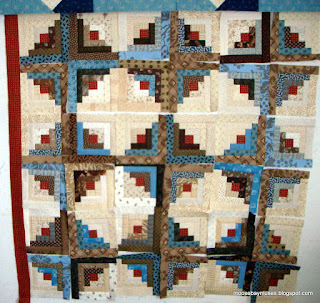 I'm still working on the log cabins and decided on this setting if I ever finish all of the blocks. 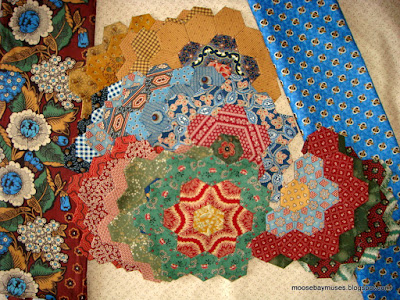 I needed a hand sewing project and decided to start Di Ford's Route 66 quilt. All of the rosettes are completed and the background hexie fabric has been prepped. The floral on the left will be my border, and the blue on the right is for the fussy cut diamonds that will create a path around rosettes. 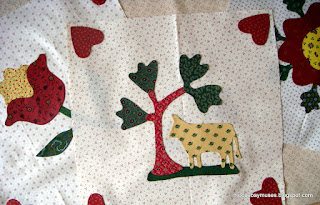 You know how addicted I am to a sew along. I tried to stay true to my vow not to do anymore of them, but caved and started Barbara Brackman's Ladies Aid  block of the month. I've also started a primitive stitching project, but you will have to join me at Instagram to see those  photos.
Take care and love to all! Karen
Posted by Karen in Breezy Point at 10:33 AM 87 comments: 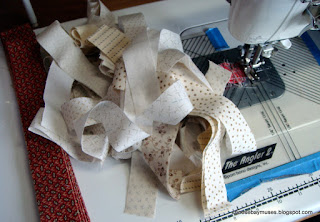 I didn't expect to have a finished quilt already this year. I have been half-heartedly piecing log cabins from these strips I cut last fall. 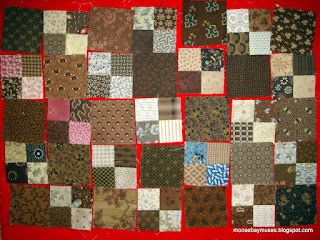 And I put together these four patches that had been sewn from my scrap box for a Humble Quilts SAL--couldn't resist the name--fifty shades of brown--lol! I think I have more like 75 shades of brown if you count the borders, backing and binding. 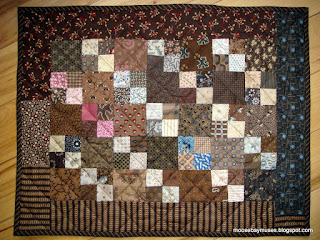 I'm not sure why it looks so misshapen here. It's about the size of a placemat and it will probably be a donation to Meals on Wheels. 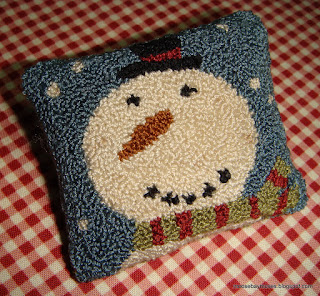 I spend most of my days doing handwork like this little needle punch bowl filler. I don't think it was meant to be a bowl filler, but that's how I'm using it. 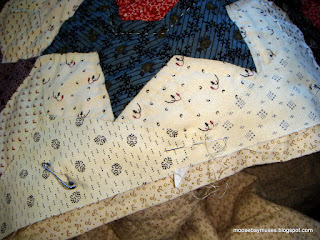 My Texas Star quilt was on the top of my 2020 list of quilts that "Had to be Finished", but it didn't happen. I had been doing the hand quilting in the evenings this month, and all of a sudden it was done! 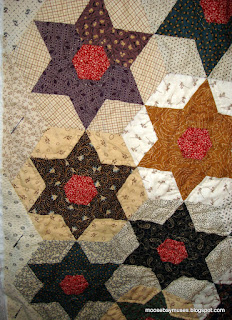 When I was measuring the top for binding, I decided I didn't want  zigzag edges, so decided to applique some wedges to the sides and then quilt those as well...so it wasn't quite done. I was excited that the end was in sight though and worked on it pretty diligently-- it went pretty quickly. 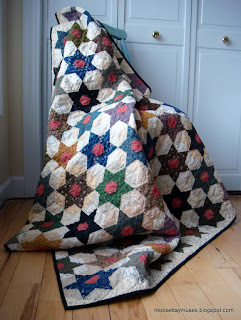 Here is my finished Texas Stars fresh out of the dryer this morning. There are 99 hand pieced stars. The pieces were cut from strips using metal templates. I'm not even sure when I started making the stars, but it has been many years, for sure. 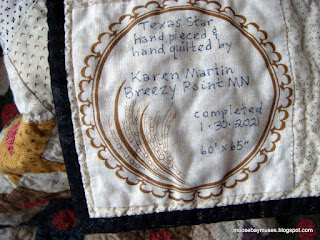 I didn't expect to have a finish for the first month of 2021 and it may be a while before I have another finish, but I am so pleased to have finally completed my Texas Stars!
Posted by Karen in Breezy Point at 2:38 PM 122 comments:

It was a slow process, but I finally finished the final twelve blocks for Afternoon Delight. My hope was to get them done before the end of year so I'm very happy and relieved that it happened. 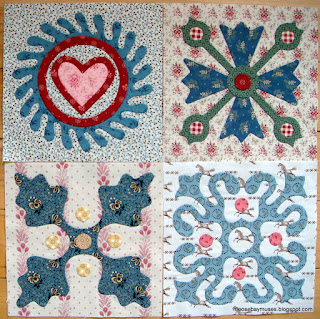 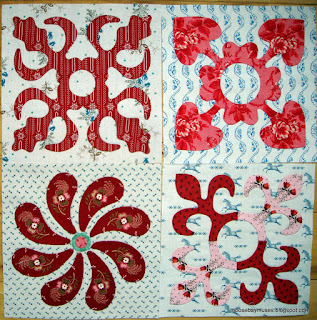 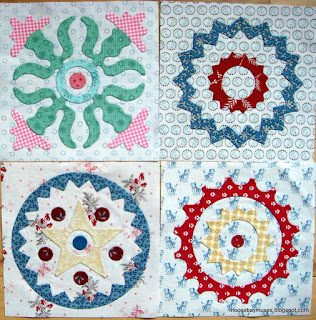 I decided long ago that I would not do an on point block setting. I want my double nine patch blocks create a diagonal path chain. You can see what  that will look like HERE when the designer Sue Garman was deciding on how she  would set her blocks. 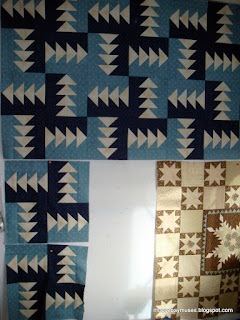 It will be a while before I get to start setting my blocks. My design wall is full and waiting for me to get to work. I have yet to fire up my machine since my surgery, so I imagine my first task will be to oil her up!
Thanks to everyone who commented and sent good thoughts my way. I haven't taken the time to figure out why I no longer get my comments by email. Another job to add to the list! I am getting around without my walker and feel stronger everyday.
Happy New Year to you all--stay safe!

I want to thank everyone that took the time to comment or write me after my last post. It's so uplifting to have so much encouragement and good wishes. 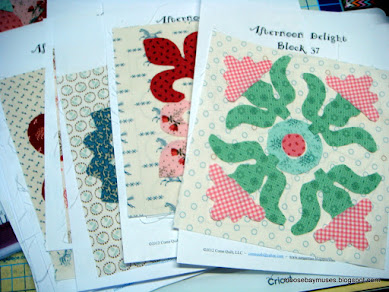 This is the extent of my work in the sewing room. I finally remembered that I needed to print out the October and November Afternoon Delight BOM patterns. I was so happy to see that the December patterns were already available too, as my membership ends this month. Soooo--these are final twelve blocks! It has taken me weeks to just choose the fabrics--my brain doesn't seem to be functioning on all cylinders--lol! It's going to be slow going getting the edges prepped and sewn as I have a bit of tremor in my hands. Hopefully that will clear up soon.

Thanksgiving is going to be different for us all, but I hope you will be safe! I know I have a lot to be thankful for!

On September 28th, Mr. Moosebay insisted on taking me to the ER. A week later, I woke to find that my entire colon had been removed, I had lost 20 pounds, was now diabetic, and had an ileostomy . They told me I had been in an induced coma as I "coded" and intubated during the first part of the surgery that was done to remove necrotic tissue. The rest of the surgery was finished the following day. I also had a dangerous C. Diff infection. Thankfully, I don't remember anything that happened before, during and for quite a while afterwards. The surgeon told me that he had done my particular surgery only five times before and he had only two survivors. I was one of them. I had been feeling a little angry that he had taken my whole colon, but realized what a miracle it was that I was even alive and so grateful for all of the efforts taken to make that happen.  I developed hospital-acquired and aspirational pneumonia. I became malnourished and had a feeding tube put in causing me to lose my voice and ability to swallow.

Finally, after three weeks flat on my back, I was sent to a nursing/rehab center. I worked very hard to get back on my feet and had an awesome team working with me. I was told I would probably be there for up to six weeks, but I am home now after only two weeks. I have nursing care coming in to help with my ileostomy, but I can dress  and shower myself.

The only time I cried during this ordeal was when I was gathering my things to go home.... 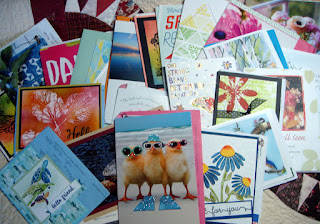 I was so overwhelmed by how many wonderful cards, email, texts and messages I got with words of encouragement. You will never know how much they all meant to me--that you took the time to think of me. Thank you, thank you, thank you!
I'm not sure when I will be up to working in my sewing  room again--hopefully soon.
In the meantime I will be working on getting  stronger with some help from my new wheels! 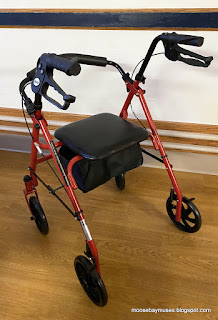 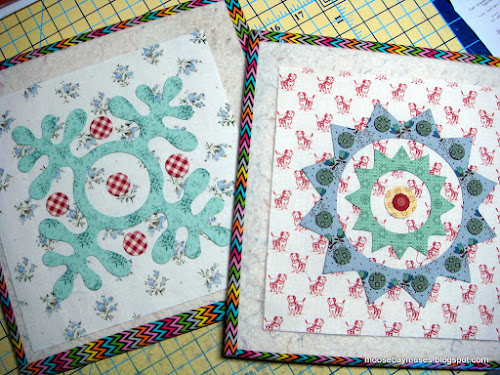 I've been looking for things I can do with my right hand (and a little help from the fingers on my left hand) and decided I could prep the September Afternoon Delight blocks for applique. Hopefully I'll be able to do some hand stitching soon. 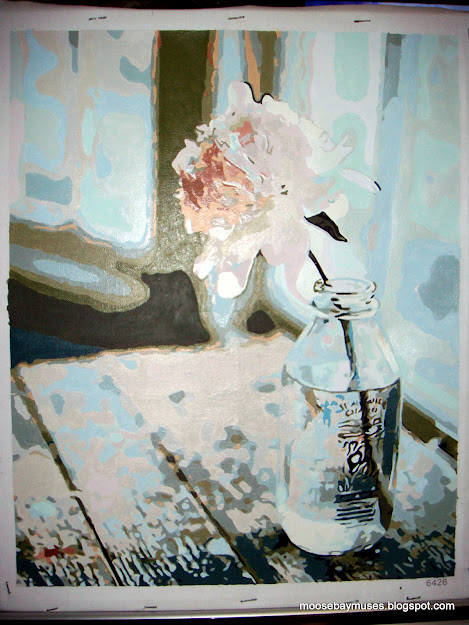 I also managed to complete my paint by number that I started about 2 years ago (I had lost interest in it almost right away). It's not the most creative way to spend one's time, but the more I worked on it these last few weeks, the more I enjoyed it--kind of mindless fun and kept me occupied..... 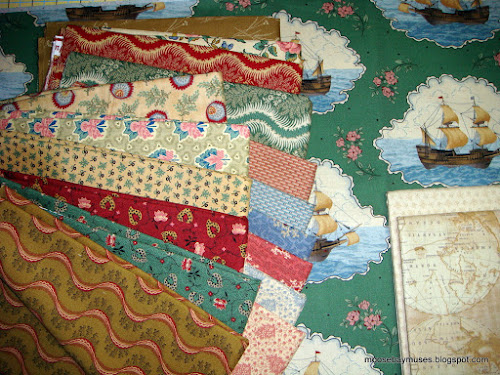 ....but, not occupied enough to keep me from doing some on line shopping. I splurged on a half yard bundle of Judie Rothermel's latest line of fabric, Coming to America. I don't have any plans for the fabric, but just had to have it! I can't wait until I can't start sewing again!
Posted by Karen in Breezy Point at 11:43 AM 109 comments: 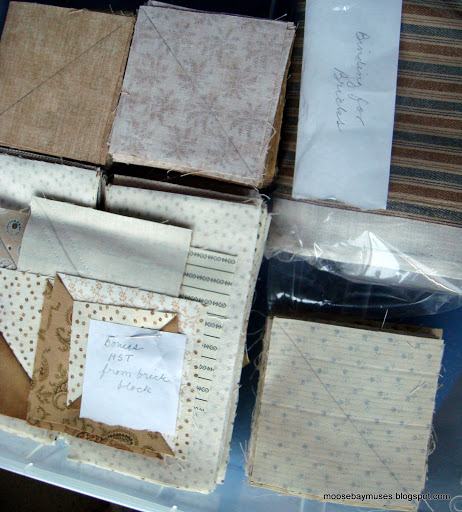 The night before my wrist surgery I was looking for something to occupy myself and ended up marking all of the squares and rectangles for Butter Butterscotch by Linda Koenig. 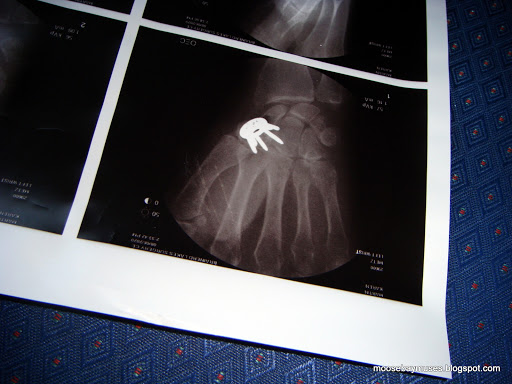 Because of the screws in my hand (feels more like ice picks!), any pressure I put on it is pretty painful, but I think I can push fabric through my sewing machine--maybe not right away but later in September. My One Monthly Goal for September is to get all 348 triangles sewn. I don't think I will be able to square everything up though. My instructions are to NOT push, pull, or lift anything over one pound. It's hard to know if pushing down on a ruler to square up a half square triangle exerts more than one pound of pressure, so until I get the okay from the doctor, I best avoid it!

Linking with One Monthly Goal HERE 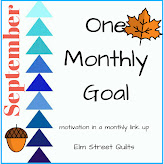