Finally, I got a chance to test out my new upgrades on my HQ16. Mr. Moosebay and I installed all the new tracks, poles and carriages over the Labor Day weekend. It seems like just a few days ago, but it's been a month and I hadn't even turned it on to see if it still worked.

This months pick for Another Year of Schnibbles hosted by Sinta and Sherri is a brand spankin' new pattern by Miss Rosie.
It's named :
I had planned to make Mercerie, but something was nagging at me--it reminded me of a quilt I've been wanting to make ever since I idiotically missed out on a swap for this quilt:


Hmmmm...that Schnibble is pretty cute--I think four of those blocks set end to end would make a cool table runner...there may a Mercerie in my future after all...
Posted by Karen in Breezy Point at 8:47 PM 3 comments:

When I signed up to join the block swap I just completed, there were lots of rules. Some of the guidelines pertained to the type and style of fabrics used, pre-washing the fabrics, use of unscented products, deadlines, etc. 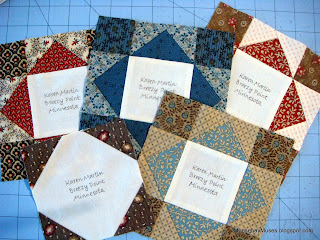 I think the hardest thing for me was using unscented products. A lot of quilters have allergies to the scents added to detergents, fabric softeners, dryer sheets and starches. Of course, you don't want someone to have an allergic reaction to the blocks you submit to the swap, so you have to be sure to follow through on this guideline!

I've used the same liquid laundry detergent since the 1970's. My oldest son had terrible allergies back then and it was the only product that didn't cause him to break out in a rash. So I stuck with a good thing and haven't had any reason to change. I don't think my detergent has a very noticeable scent, but I'm sure there has to be some sort of scent added to it--maybe after over forty years, I'm desensitized?  To be safe,  I ran my fabrics through just a rinse cycle and then dried them without adding a dryer sheet. 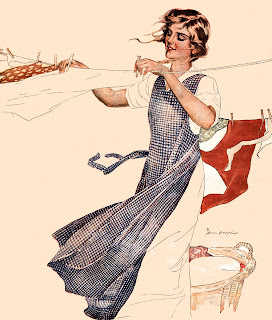 But then came the construction of the blocks. I hadn't realized how much I depended on my Mary Ellen's Best Press Clear Starch Alternative!
I love the scents.
I love how crisp my fabric feels.
I love the steam facial I get while pressing.

Someone in the swap group mentioned that it was possible to make your own "best press", so I did a little research and found several recipes online. Just about all the recipes I found used distilled water and vodka. Apparently, the vodka, being made from potatoes (or wheat, I have learned) has a starch effect that contains no scent. I decided to give it a try. The recipe says to use the cheapest possible vodka, because the idea is too save money! 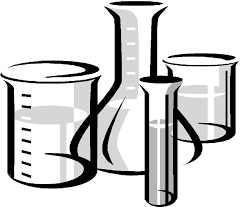 Basically all of the recipes boiled down to :
24 ounces of distilled water
3 ounces of vodka
Mix together and store tightly capped.

Cons:
1) I didn't really feel like the vodka/water mixture did a thing to crisp up my fabric. I thought about upping the ratio of vodka to water, but was afraid of scorching or spotting. (There are recipes that suggest adding a teaspoon or so of corn starch, but that seemed like it would also cause spotting, so I didn't try it.)
2) If you aren't happy with this mixture, you are left with a lot of cheap vodka that you will have to figure out how to use up in something else.
3) The sewing room smells like a cocktail bar. Caution: spouse will not believe you are just ironing.

Pros:
1) Cheap
2) The mixture absorbs into the fabric very fast, and when pressed, evaporates quickly.
3) The sewing room smells like a cocktail bar. Caution: could cause craving of wine at 9 am.

I will continue to use up my pint of cheap vodka making starch alternative, but will be going back to my Lavender Fields ASAP.

Here it is already Friday and I feel like I haven't accomplished much anything this week.
I am trying to think back and figure out where the week went.
Monday was the last Stitch Therapy meeting of 2013.
I completely blanked out and took NO photos--my bad!!


On Tuesday, I managed to get the tracing done on the large center block of Words to Live By, and got most of the fused applique finished too. I've been doing bits of the embroidery in the evenings. 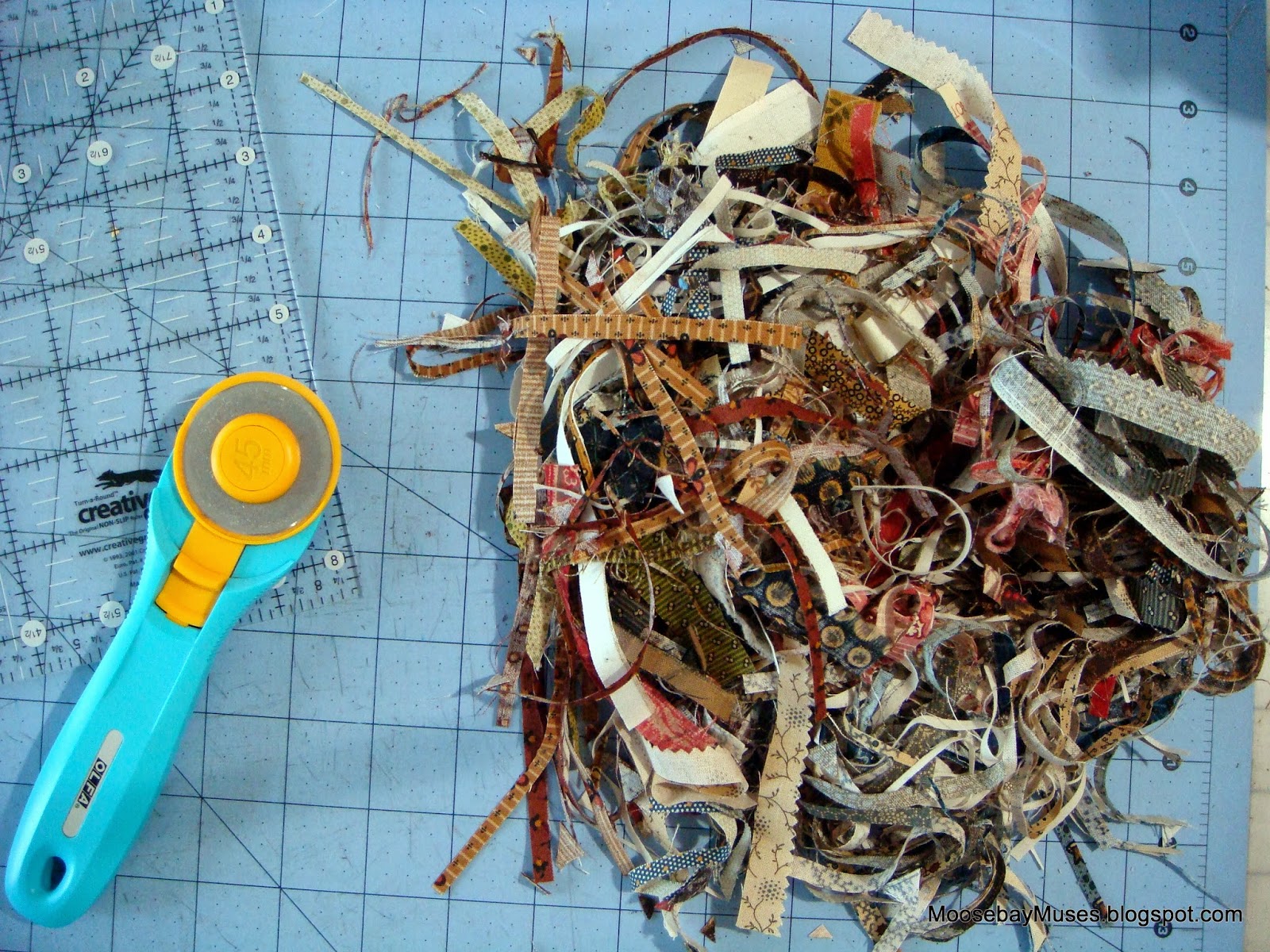 There's also been some triangle trimming going on!
Posted by Karen in Breezy Point at 4:06 PM 3 comments:

I'm not sure what happened to this week--it flew by so fast!
Yesterday I had a long road trip to celebrate my aunt's 95th birthday.
I sure hope I inherited some of those longevity genes!
Last Monday our guest speaker was Deanne Eisenman. Deanne has written a couple books for Martingale and is currently working on a book for Kansas City Star books on the history of applique--I can't wait for that one! She also designs patterns for her company Snuggles Quilts (named after her cat who helps her work on her quilts). Her patterns are scrappy and most have applique--two of my favorite things!!

I plan to get this quilted soon. Even though I haven't  turned on my HQ16 since we installed all of my upgrades over Labor Day weekend, I'm hoping to see a huge improvement in my quilting abilities--ha!
Posted by Karen in Breezy Point at 12:17 PM 5 comments:

Posted by Karen in Breezy Point at 3:25 PM 2 comments:

Flying Goose Ruler Tutorial/The Blocks are in the Mail!

I felt like a huge weight had been lifted when I finally got those swap blocks in the mail on Wednesday morning.


The small block was a 4.5" snowball. I got those sewn up a couple weeks ago and last week got the "flippy" corners pressed out, trimmed the extra fabric from under the triangles and then squared them up to size.

The larger block is another story. I'm not sure of the block name, but it's basically a central signature square surrounded by flying geese with cornerstones.
Thankfully, someone in the swap group mentioned the Eleanor Burns flying goose ruler.
These rulers were new to me, but I've since purchased the Small Flying Geese Ruler (the one I use here) and the Mini Ruler Set that has 2 FG rulers and a fussy cut ruler.
Each Flying Geese ruler has 2 sizes on it. 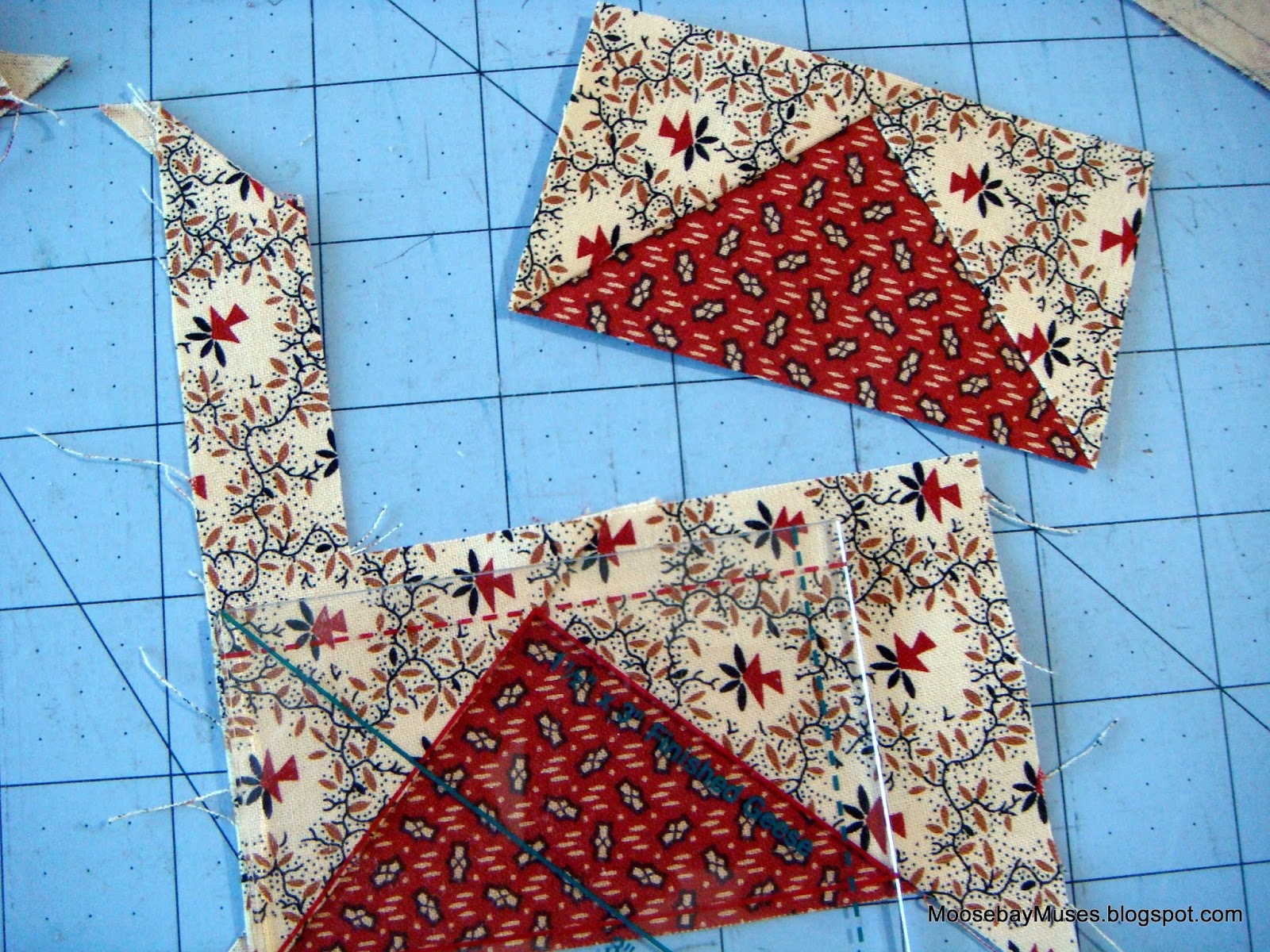 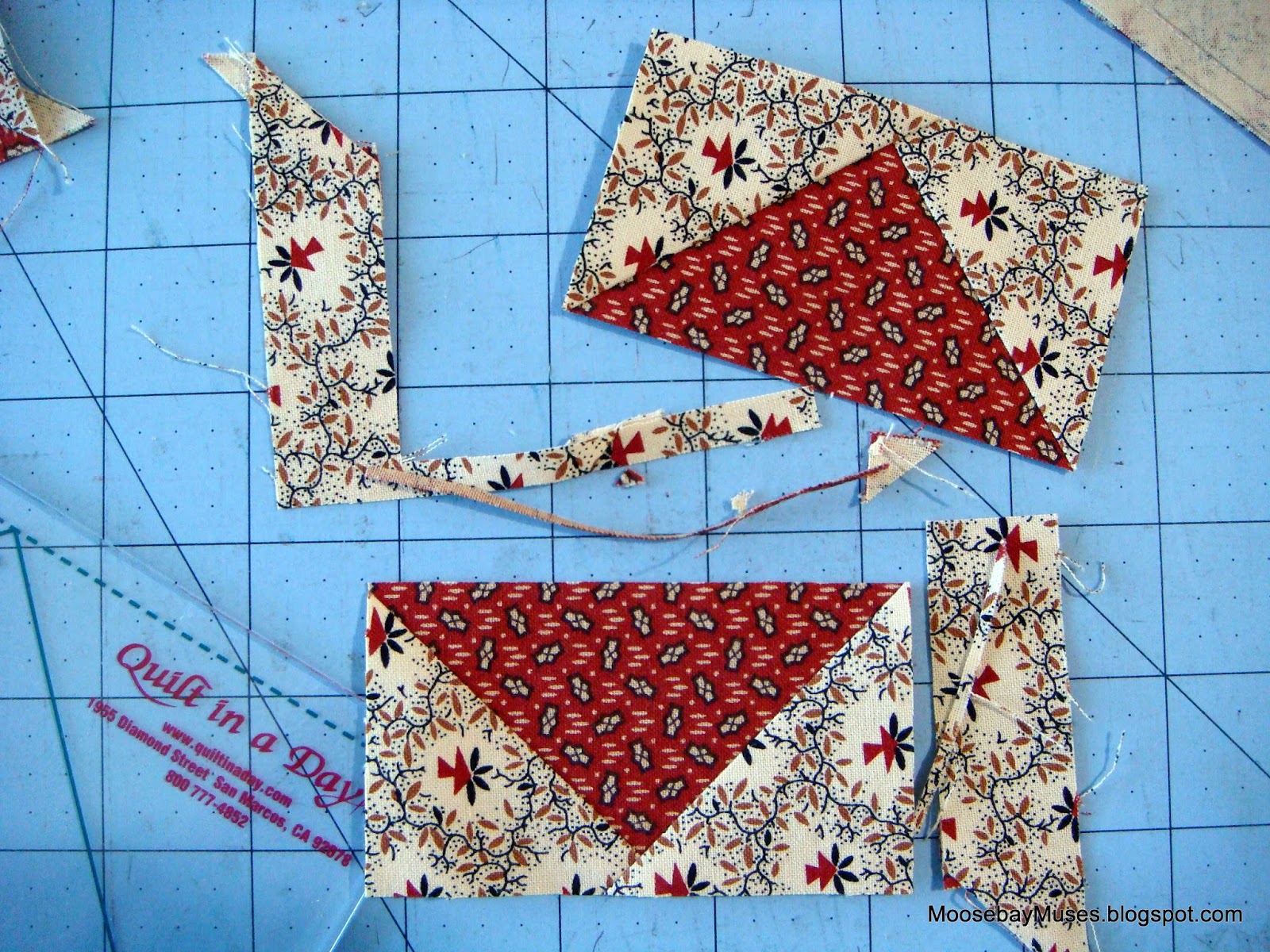 Posted by Karen in Breezy Point at 7:48 PM 2 comments: