Okay, I was wrong. I assumed (you know what they say about that!) since the Temecula Stars ran through today, there would be 9 stars, but it was not to be. That's alright though, I am going to make up my own ninth star center and my own setting, because I'm not totally in love with the eight block setting they have posted. I'll let you know what I come up with when I figure it out!

While I was over at the Temecula Quilt Co. blog picking up the weekly star pattern, I noticed the button on the left hand column labeled "12 Days of Christmas".  I clicked on it (naturally), and found another group of little blocks. When  I figured out the secret behind them, I had to make a set of my own.

Can you guess why the quilt is called the 12 Days of Christmas?
Each block contains the number of pieces to represent the day. I thought that was pretty clever and would be a fun conversation piece to put out during the holidays--yeah, I got sucked in. It looked so simple and easy, and was, for the most part....BUT!!!!  My first issue was with the pinwheel block: 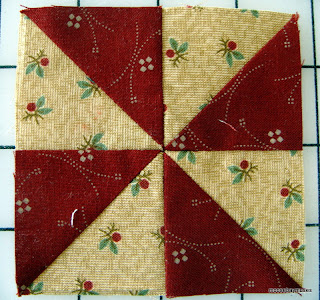 I think my pinwheel  (day 8) had too much contrast. My eye seemed to be drawn directly to that block, so I made a new one using fabrics with a bit less contrast.

My next irritation was the X block (day 11):

And lastly, one of the easiest, aside from Day One, the twelfth block.
Unfortunately, I had to remake this one, also.

I would recommend that if you make this quilt, you use a dark, med., and then a light (in that order) to make block 12 or you may end up with something that looks like a swastika, like I did.  Too bad I didn't notice that until the top was all put together with sashings and borders. At least it wasn't quilted yet, so it wasn't TOO much trouble to pick it out and replace it.

Posted by Karen in Breezy Point at 2:31 PM